I now have both 2m and 70cm Cebik Moxons in the attic separated using a HA8LFK diplexer. After trying out the 70cm aerial it is clear that it needs a preamp to pick up any signals. Partly this is due to the poor coax I’m using and I should replace it with something better. So I’ve added an M-100 preamp powered from a shack PSU through a pair of bias-tees.

I tried bypass the M-100 with a relay but I haven’t been able to source a relay that works well at UHF. Usually the non-connected path is only 20 or 30 dB down on the connected path. This is not safe enough to protect the preamp, so that’s another reason for giving up transmitting for now. I’m pretty sure the aerials will not be good enough for decent transmissions and I would end up being the recipient of pleas from an OM: “I got the Mike, Zero and Yankee, your callsign again again please…”.

The setup looks like this scribble from my lab book: 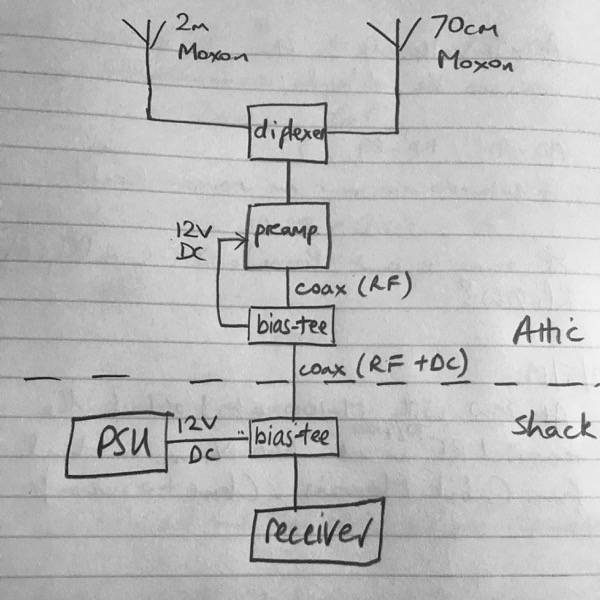 Unfortunately the M-100 draws 55mA which is 5mA too high for the built-in bias-tee in the SDRplay RSP2. The RSP2 is my receiver of choice at the moment. More on that later.