I use a Yaesu FT-60 for my satellite radio. It’s a little onerous to manually  program satellites into it so I use the CHIRP application to do the programming.

I can’t use my FT-60 programming cable directly on macOS (my native OS) because it has a Prolific chipset for USB/serial operation and its driver clashes with the FTDI chipset which is in other USB/serial devices I use.

I first used a Windows 10 virtual machine (VM) under VirtualBox to run CHIRP. This worked fine. But I only use Windows 10 sporadically and when I start Windows 10 it nearly always wants to reboot to do an update. This is tedious and slows things down a lot. I spent more time waiting for Windows to update than running CHIRP.

So I’ve put a Ubuntu VM onto VirtualBox and now run CHIRP quite happily from there. Hopefully Ubuntu won’t insist on upgrading quite so often as Windows 10 does.

I decided to build or buy a diplexer to communicate with LEO (low earth orbit) satellites that use cross-band operation.

Some of the satellites in LEO are U/V or V/U. U/V means the satellite receives at UHF but transmits at VHF. V/U is the other way around.

My space aerials are in the attic and there are only two cables going from the shack to the attic. One thick cable is used solely for HF, and the other thinner cable is used for higher bands, 6m, 2m and 70cm.

A diplexer allows the use of different frequencies on the same cable. In this case it allows both VHF and UHF aerials to be used on the same cable. The diplexer has one input (from the transceiver) and two outputs (one to the VHF aerial and one to the UHF aerial) when transmitting. The diplexer blocks VHF signals going to the UHF output, and also blocks UHF signals going to the VHF output. In this way the transmit power goes where it is most wanted, that is, to the appropriate aerial.

On receive the same ports are used but there are two inputs (one from each aerial) and one output (to the transceiver).

I decided not to built a diplexer for VHF/UHF operation as fiddling with inductors at those frequencies can be a bit hit-or-miss unless you use SMD components. It’s much easier to buy one, especially for those of us who are challenged when building VHF and UHF inductors. There are a few diplexers on offer, and I chose one on eBay from HA8LFK. It seems well built and works fine. The 50W limit certainly won’t affect me just now as the highest power I can send on VHF/UHF is 5W. One drawback may be that the sockets are SMA and my shack mostly uses BNC for VHF and above. 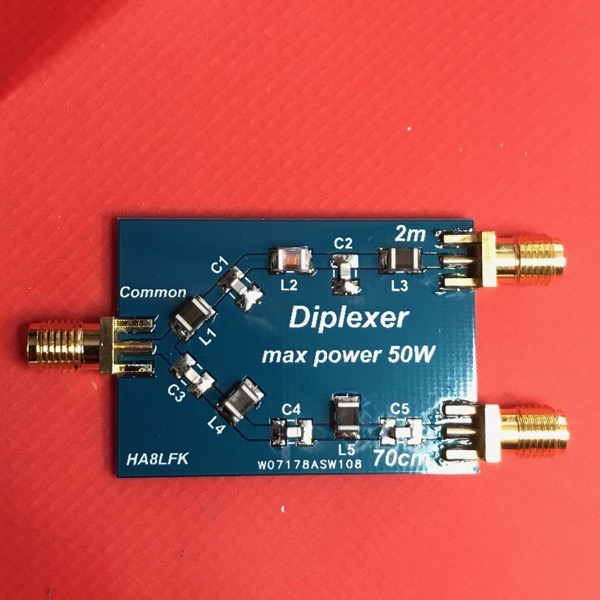 I have characterised this diplexer by sending sine waves of various frequencies through its transmit path and measuring the outputs. The signals came from my WaveTek model 1062 sweep generator and were measured at my HP 54615B scope. I used SMA/BNC adapters and short BNC cables to connect the diplexer to the test equipment. 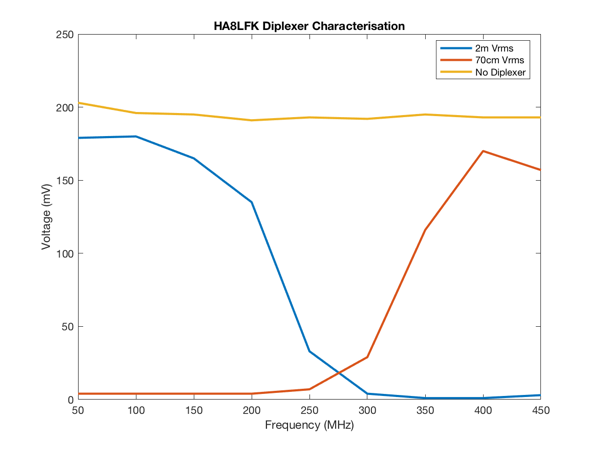 I didn’t make a graph for receive but did measure the insertion losses: 0.72dB at 2m, and 1.24dB at 70cm. This surprised me as I would have thought the diplexer would be symmetric, but it appears not.

Now to use it in anger … 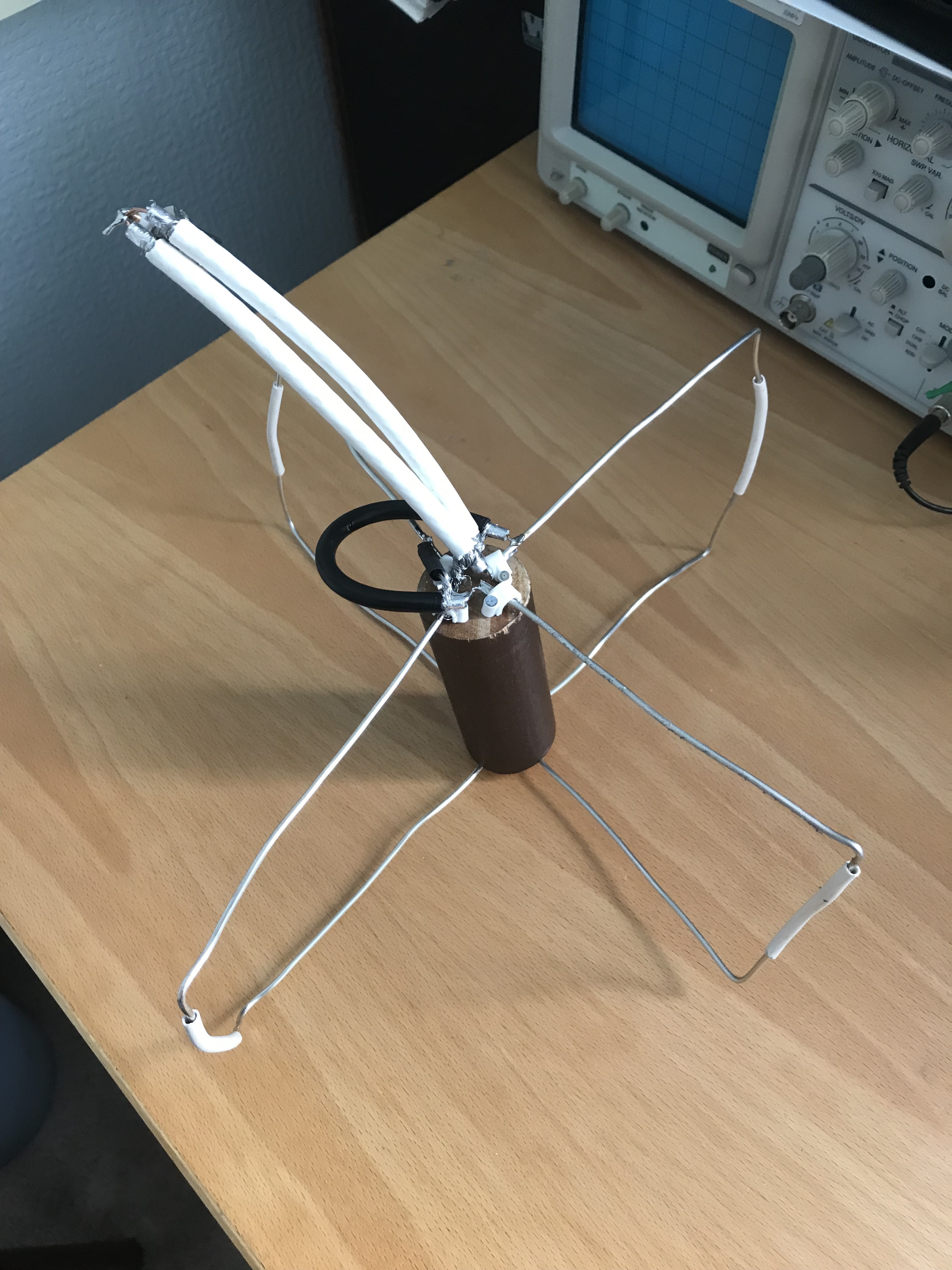 The 70cms (435MHz) version of the Cebik Moxon is now built and shows an SWR of 1.1 in the shack as measured with my AW07A antenna analyser. Hopefully this SWR will not change too much when I put in in the attic.

The elements are made out of #12 AWG wire from RS Components. The sizes are as specified in Cebik’s original article published in the ARRL QST in August 2001 “A Simple Fixed Antenna for VHF/UHF Satellite Work”. The phasing line is built as for the 2m version using RG59U coax cable from BitsBox only using a length for the 70cm band. The matching line is made from old 75Ω cable TV cable again at 70cm band length. The elements and lines are explained in my earlier post about ‘Building the 2m Cebik Moxon’.

The elements are stapled to an old wooden curtain pole to keep the driven elements and reflectors apart. At the ‘floating’ end they are kept apart using the insulation from old multi-core telephone cable and the shaft from cotton buds. I’ll hot-glue these in place once the aerial is in the attic. The distance between these floating ends is the most critical in the whole aerial.

I plan to use this aerial with the 2m version and suitable diplexers to communicate with U/V or V/U LEO satellites. Watch this space!