The WSPR transmitter needs an LPF to help make the transmission clean with low-level harmonics. I chose an RV3YF LPF board which has LPFs for each ham band. The band to be filtered is chosen by raising the voltage on the correct pin in a row of pins. The WSPR transmitter uses a separate PIC controller to select the correct pin. I chose a separate PIC so that the LPF and its control could perhaps be put into a module together. I haven’t actually done that but it’s possible. 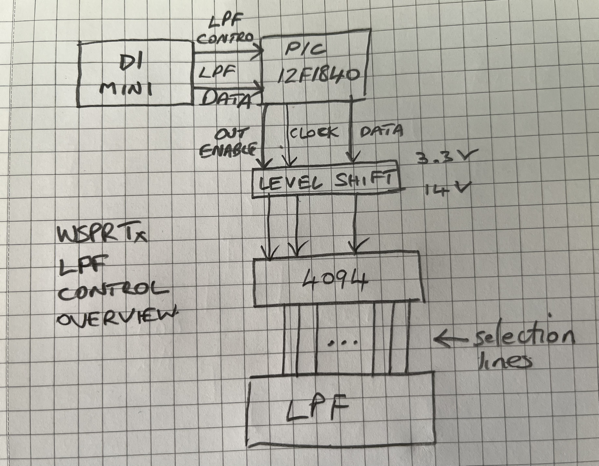 As you can see the D1 Mini tells the PIC which pin to select. The PIC uses a 4094 to convert from serial to parallel.

I had intended that the interface between the D1 Mini and the PIC be an I2C connexion. But I couldn’t work out how to make the PIC act as an I2C slave. There are plenty of examples of I2C masters, but slaves are thin on the ground. So the interface is a home-brew protocol. Luckily I had just enough pins available on the PIC. The LPF_CONTROL line is raised by the D1 Mini when it is going to configure the LPF. It then raises and lowers the LPF_DATA line the appropriate number of times. Then the LPF_CONTROL line is lowered to denote the end of configuration. The PIC sits waiting for the LPF_CONTROL to go high and counts the number of transitions of LPF_DATA seen before LPF_CONTROL goes low.

I found it impossible to debug the D1/PIC interface on a breadboard as the signals were too noisy. So I decided to put the circuit straight to strip board. This solved the  debug problem and it worked happily when powered from the bench supply. I then added some circuitry to supply the 14V from an off-the-shelf buck converter. Unfortunately (or probably my own foolish fault), when I was adapting the power circuitry I managed to make (at least) the RTC module go up on smoke. I still don’t know why it did.

I’ll post the code and the strip board layout next time.